The ‘Anniversary’ release of our 2019 Cabernet is a celebration of our journey into vines and wine. From digging the first holes and planting vines in 1999 on our unique little site in Seville in the Upper Yarra Valley. Our initial plantings were all Cabernet Sauvignon, a decision based on the history of the Yarra Valley and what was the regions original mainstream variety from the early pioneers of Seville Estate, Yeringberg, Yarra Yering and others.

The soils and microclimate of the Paynes Rise vineyard have proven to be the perfect relationship with the Cabernet varietal. The consistency of Cabernet produced from this site over 20 years has been something we are immensely proud of. Once some vine age was established the fruit really began to shine. In 2010 The Paynes Rise Cabernet won the top Gold trophy for Best Cabernet Sauvignon and was also awarded the Trophy for best single vineyard red wine at the Yarra Valley Wine Show. Other vintages since then have been awarded 7 gold medals and have received many highly rated reviews. At the recent Yarra Valley Wine Show our 2019 ‘Anniversary’ Cabernet sauvignon was awarded the top Gold medal and Trophy for Best Cabernet Sauvignon.

HEAD OVER TO THE WINE SHOP 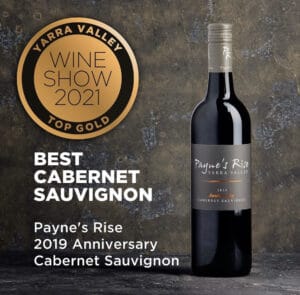 Posted on January 23, 2022 by tim Cullen in Uncategorized